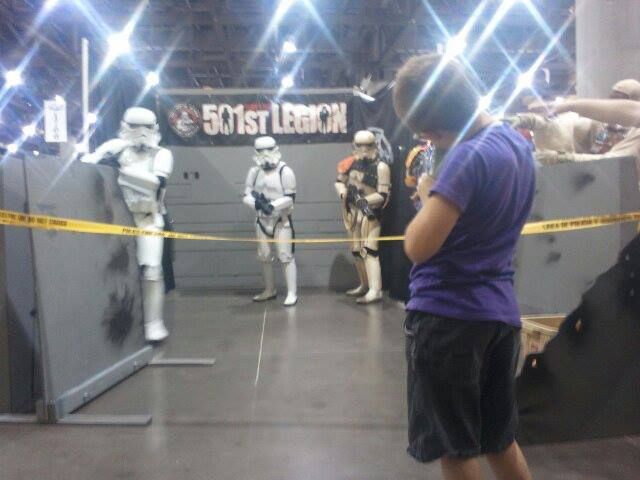 Phoenix Comicon, founded in 2002, is known as the signature pop culture experience of the southwest and is unrivaled for it’s annual growth in popularity and convention goers. This year was not only another success, but a huge surprise with a 58% increase in the number of fans from last year.  Over 55 thousand people packed the Arizona Convention Center for this 4 day event. The Dune Sea Garrison is proud to have been a part of the multi-club cooperative known as The Star Wars Neighborhood.  By joining forces with the Mos Eisley Base of the Rebel Legion, the Arizona R2D2 Builders, and the Shonare Vhekadla Clan of the Mandalorian Mercs the Star Wars Neighborhood was able to secure the largest amount of convention hall space of any exhibitor.  The working relationship between the DSG and Phoenix Comicon has been extremely beneficial over the last 10 years, due in no small part to the fact that a handful of DSG members are even on the PCC staff in very important planning and managing roles.

With the addition of Blast A Trooper this year, sharp shooting youngsters were able to take aim with Nerf guns and have the thrill of blasting Stormtroopers for a small donation.  A huge success, this event raised $505.00 for the Kids Need to Read national charity foundation.   (click here for Fox News video)

In addition to the ‘great fun had by all’ happening on the convention floor, the DSG held 2 panels: “Meet the 501st” and “Understanding our costuming”.  These ran back to back on Saturday and gave the packed house an insight into why we exist as a costuming/fan club.  Highlighting the comradery that 501st members hold with each other and the vast amount of charity work that we do. (Although it’s hardly work.  More like play, if you ask us.)

It was great to see so many 501st Legion members from out of state also in attendance at PCC, with some of them even suiting up and helping out with the  entertaining of the huge crowds.  *Special thanks to the 8 foot tall Wookiee, Tarful, from Las Cruces,  New Mexico.  He was awesome!*

This year’s exhibit and membership booths were definitely a rave hit; word quickly and frequently all the way to the top of the Comicon managers about the great things happening in the Star Wars Neighborhood, and the DSG has already seen a bump in membership requests and new recruits looking for help with costumes so that they can become ‘One of Us’.

Here a a couple photos from Phoenix Comicon weekend.  Visit us at the DSG Fan Page for more.