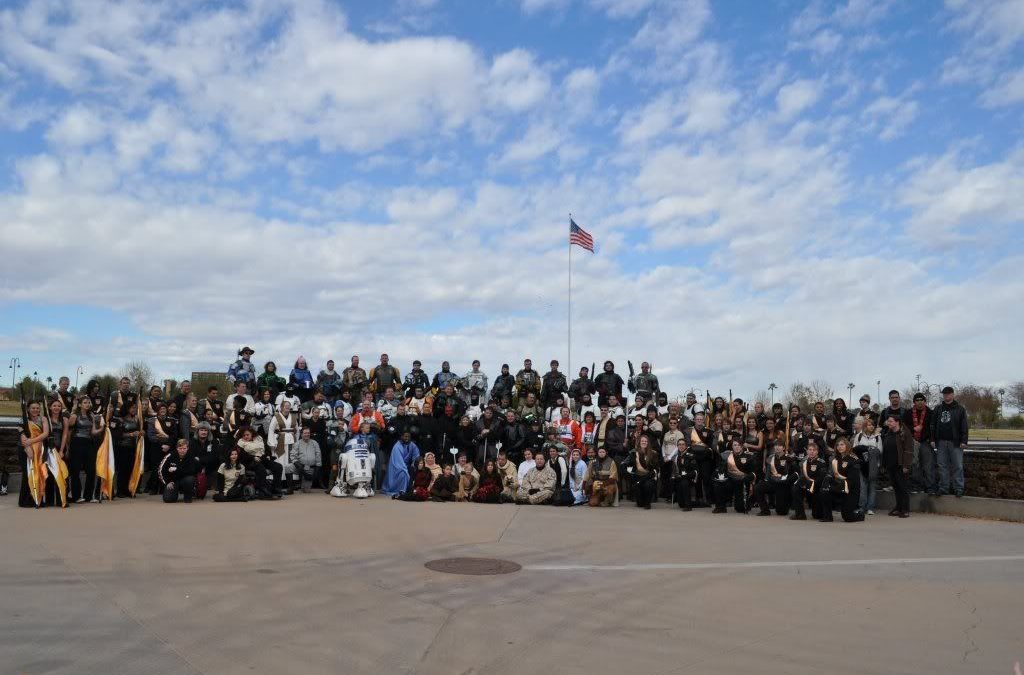 What comes to mind first and is the most important is the enthusiasm and sacrifices of the Desert Edge High School Marching Band members from Goodyear, Arizona; there has been no spectator of the Fiesta Bowl Parade to date that was witness to the full Star Wars experience unfolding before their eyes live and in person with the accompaniment of live Star Wars music performed by a marching band alongside the vast display of Star Wars costume characters..

Under the direction of Kasey Romero, the musical talents and flag presentation by the Desert Edge High School Marching Bands 44 students made this year’s Fiesta Bowl Parade event, a very special moment for the thousands of spectators and the club members whom participated. We were all treated to three renditions of musical scores from the Star Wars Movie Saga, The Imperial March, Star Wars Main Title and the end credits theme.

The students put in numerous hours of both school and personal practice time to assimilate the musical scores for the event over a very short two month time frame, a time frame that also included school finals and the holidays. A major hurdle to this endeavor came early on when research revealed that the sheet music for these particular musical scores for marching band performances was no longer in production. It was the Band Director’s hard work and determination to her students that sheet music was located and obtained. The volunteer members of the 501st/Dune Sea Garrison, Rebel Legion/Mos Eisely Base, Arizona R2 Builders Club, Mandalorian Mercs/Shonare Vhekadla Clan and the Republic Service Organization/Imperial Service Organization (RSO/ISO) are deeply grateful and appreciative of all your efforts and hard work making this first ever concept of having a marching band in the formation with us a reality. I look forward to the very near future when I have the privilege to visit the school and present to the Band Members a very special trophy currently under construction and the likes of which cannot be found in any other school in the State of Arizona nor can it be purchased. As I reflect back on the day I recall another defining moment of this event, the debut of the Rebel Legion/Mose Eisely Bases pending C-3P0 character portrayed by Jordan Lamphiere of Flagstaff Arizona. There was and is so much enthusiasm for this character to be in the Arizona region and for it to be added to the regions vast and diversified representation of Star Wars Characters. As we watched Jordan transform into C-3P0 we not only saw his emotional joy and pride for the work he put into making this day a reality, but also the awe of the spectators and Star Wars Fans all around anxious to get a picture with C-3P0. This new addition to the Arizona Region is already destine for the lime light that we all share for our craft but also our desire to make children and those less fortunate happy if only for a moment. Jordan has represented the 501st/DSG very well over the years as a “Shadow Trooper” and I have the utmost confidence that he will exhibit the same pride, and dedication to the members of the Rebel Legion/Mos Eisely Base as their new C-3P0.

Another milestone of our participation and contribution to the Fiesta Bowl Parade was our number of volunteer costume members as well as non-costume support staff totaling 130. In addition was the collaborative effort of time, funding, and labor by all five clubs to complete and present a fully scratch built parade float. In addition this year we were able to showcase two charity campaigns which two of the clubs are actively working with this year, “Kids Need to Read” on behalf of 501st/Dune Sea Garrison and the “Mesa’s Relay for Life” on behalf of the Rebel Legion/Mos Eisely Base.

In summery this event undertaking was a source of great pride and expectation for all involved in it. I am happy and proud to have had the opportunity to work with each and every one of the many volunteers and I look forward to next year, as we begin planning on a way to grow our participation and set a goal to step it up a notch and surpass this year’s presentation for next year.