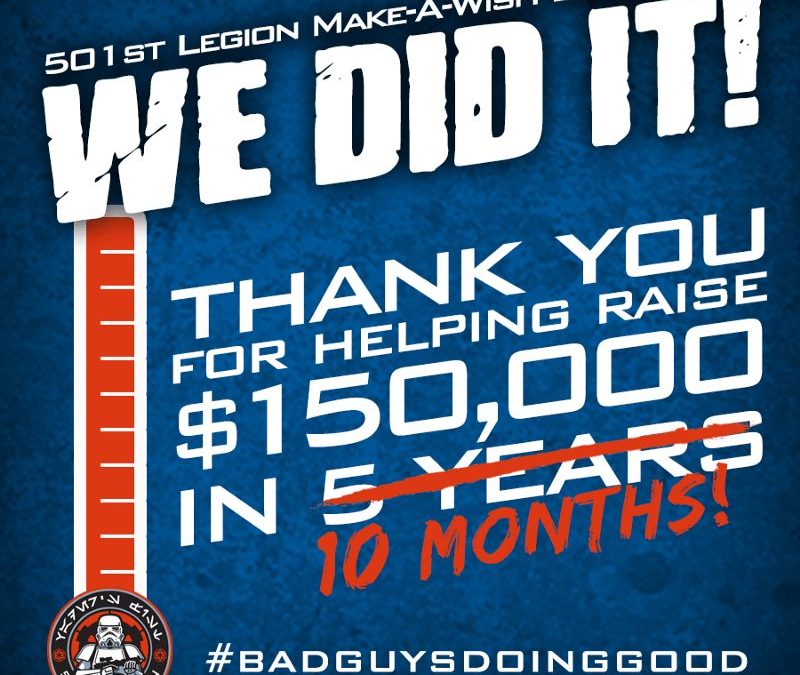 The goal for raising the original fundraising commitment of $150,000 was set for September 2021, five years after the launch of the endowment in 2016. This goal for the 501st Legion Make-A-Wish Endowment was completed in just 10 months.

The 501st Legion is now focused on raising an additional $350,000 by the original goal date of September 2021. Increasing the goal will allow the 501st Legion Make-A-Wish Endowment to grant additional wishes to ailing children every year.

The Endowment relies on contributions from the 501st Legion’s membership as well as the public. The Legion does not charge for character appearances, but has always accepted donations to charities in honor of their presence at events. The Endowment will begin granting wishes from the interest accrued by June of 2018; as the fund continues to grow, so will the number of wishes granted.

Donations to the Endowment can be made at www.Wish.org/501stfan.

The 501st Legion’s mission to give back to the community through charity and volunteerism will be significantly strengthened through the 501st Legion Make-A-Wish Endowment, allowing the organization to band together for an even greater global impact.

ABOUT THE 501ST LEGION
Celebrating its 20th anniversary in 2017, the 501st Legion is an all-volunteer, non-profit organization dedicated to bringing beloved Star Wars characters to life. Founded in 1997 and now comprised of more than 11,000 members in over 60 countries, the 501st Legion seeks to promote interest in Star Wars through the building and wearing of quality costumes. The group helps costumed fans organize for Star Wars-related events, and contributes to members’ local communities through costumed charity and volunteer work. Visit the 501st Legion at http://www.501st.com to learn more.
The 501st Legion is a worldwide Star Wars costuming organization comprised of and operated by Star Wars fans. While it is not sponsored by Lucasfilm Ltd., it is Lucasfilm’s preferred Imperial costuming group. Star Wars, its characters, costumes, and all associated items are the intellectual property of Lucasfilm. © & ™ Lucasfilm Ltd. All rights reserved. Used under authorization.

ABOUT MAKE-A-WISH
Make-A-Wish grants the wishes of children with life-threatening medical conditions to enrich the human experience with hope, strength and joy. According to a 2011 U.S. study of wish impact, most health professionals surveyed believe a wish-come-true has positive impacts on the health of children. Kids say wishes give them renewed strength to fight their illness, and their parents say these experiences help strengthen the entire family. Headquartered in Phoenix, Make-A-Wish is one of the world’s leading children’s charities, serving children in every community in the United States and its territories. With the help of generous donors and more than 28,000 volunteers, Make-A-Wish grants a wish somewhere in the country every 35 minutes. It has granted more than 270,000 wishes since its inception in 1980; more than 14,800 in 2015 alone. Visit Make-A-Wish at http://www.wish.org to learn more.

ABOUT FORCE FOR CHANGE
With the release of Star Wars: A New Hope in 1977, fans immediately began to embrace the film’s elements of struggle, hope, and inspiration on a more personal level. Philanthropy was very important to George Lucas. Beginning in 1977, he hosted screenings of Star Wars to raise money for charities around the world with a particular emphasis on children’s healthcare and education. Over the course of the last four decades, Star Wars fans have kept this philanthropic spirit alive by volunteering their time to countless charities across the world and raising millions of dollars in donations.
In this new era of Star Wars storytelling, Star Wars: Force for Change aims to support the immense passion and goodwill of our fans and promote change through inspiration, stories and meaningful partnerships- to bring out the hero in all of us. Visit forceforchange.starwars.com to learn more.