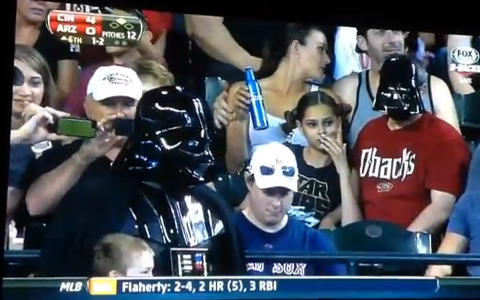 The Arizona Diamondbacks hosted a very special fan appreciation event on June 23rd, 2013.  Star Wars Day at Chase Field in Phoenix, Arizona was a spectacular success this year.  With over 40 costumers from the combined  Arizona Star Wars clubs (501st Legion, Rebel Legion, Droid Builders, and Mandalorian Mercs) and a stadium filled with very enthusiastic Star Wars fans The Force was in full force.

The Diamondbacks added to the good will and festivity of the night by taking a portion of each game ticket and donating it to Stand Up to Cancer.

The Dune Sea Garrison, along with our fellow costuming groups, are very thankful to be a part of this event each year.  Not only for the fans in participation, but for the chance to bring so many members together in one place.  It is one of the largest gatherings we get to take part in and it was a real treat.