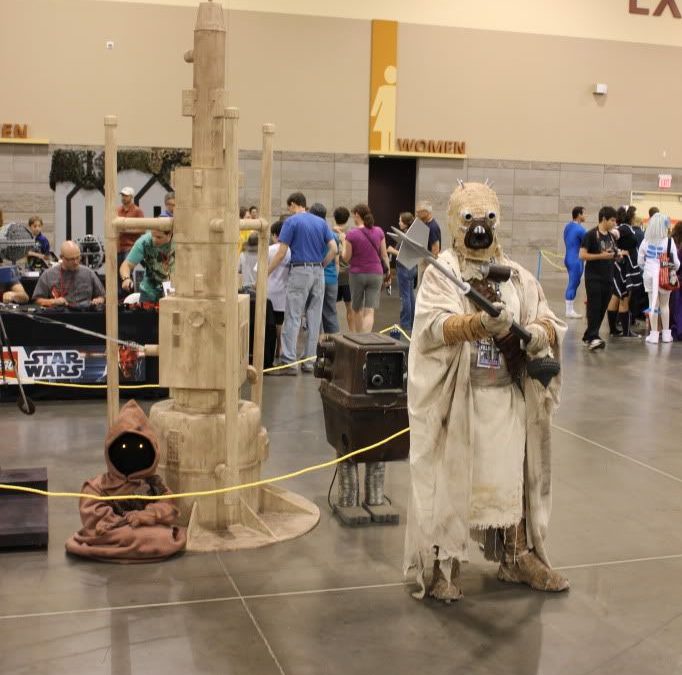 The DSG partnered with the Rebel Legion’s Mos Eisley Base, Mandalorian Mercs Shonare Vhekedla Clan, and the AZ R2 Builders to create the Star Wars Neighborhood to provide the convention goers with a Star Wars experience.  The Neighborhood provided fans an opportunity to get their picture taken with Star Wars characters in front of the Millenmium Falcon photo wall or see a life-sized moisture vaporator complete with Jawa and droid. Helmets and costumes were on display so fans could see how these amazing characters come to life!  Each club was also featured with a booth to discuss the great charity events that they participate in, costume building, and the process to join each group. The DSG hosted several panels during the course of the convention.  The panels included Darth Maul Costuming, Costuming for a Cause, Meet the 501st, and Star Wars Costuming for Women.  Panel guests were entertained by the banter of the panel hosts with many laughs for all.  All of the panels were well received by attendees. The kids certainly were not forgotten.  The DSG provided training to become a stormtrooper through Imperial Cadet Training (ICT) on Saturday and Sunday.  ICT begins with kids practicing their NERF shooting skills at targets.  They then move to a NERF battle with veteran stormtroopers as they use walls for cover while advancing on the veteran’s position.  Each child is rewarded with a Certificate of Completion at the conclusion of their training session. The DSG advanced its core mission of support to charity causes during PCC.  A charity raffle was held at the DSG booth in the Star Wars Neighborhood to benefit Princess Leah and her family.  This beautiful little girl has struggled her entire short life of 18 months with a mysterious and at times debilitating illness.  To provide some relief to this family, the DSG raffled two completed fan made helmets, a sandtrooper and a TIE pilot; a dual 12-inch action figure pack of Darth Vader and Darth Maul, a 501st action figure; and several smaller fan made props.  The raffle raised $1,014 and was promptly delivered to the family.

This is the heart of the 501st Legion and the Dune Sea Garrison.  It drives many of our members to continue their costuming adventure.