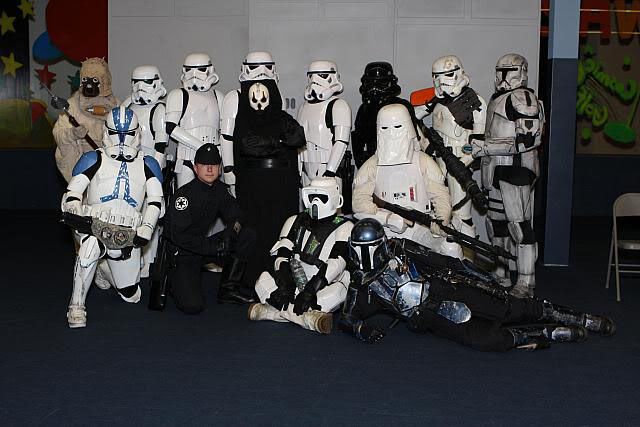 On September 2, 2011 members of the 501st Legion Dune Sea Garrison and Mandalorian Mercs/Shonare Vhekadla Clan invaded Wazee’s World to help out the Operation Homefront/Wounded Warriors.  This was a wonderful event – and I would like thank the volunteers for coming to this event to not only help raise money for this great charity and to show support for our military men and women, especially the ones that have been wounded in battle.  This is was the first time that we have done this event and it was a big success! It was a great feeling knowing we made everyone there happy while at the same time helping our military members and their families out.  For some of us it was dear to our hearts, like me, as my husband served four years with the Marines and to this day I’m still considered a Marine Wife.  We always have and always will support our military.

The owners of Wazee’s World have a strong connection to the military, so it was a perfect for them to hold a event like this to show their support and to help the military out. We are honored that they asked us to be a part of this wonderful event and look forward to doing it again next year!

A great time was had by all everyone and a BIG thanks to everyone that came out!